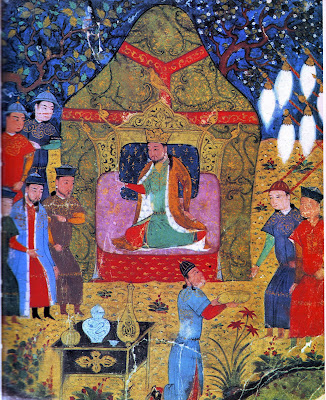 “The origins of Chinggis Khan,
There was a blue-grey wolf which was born having his destiny from Heaven above.
His spouse was a fallow doe.
They came, crossing over the Tenggis Sea.
Batachiqan was born to them while they were camped at the source of the Onan River,
At Mount Burkhan Khaldun.”

That is how the creation story of the Mongol people begins in the opening lines of the “Secret History of the Mongols’, the earliest known and most important primary source on Mongolian history. The deep relationship that Mongolians have with Nature and their homeland is clearly conveyed in this historical narrative.

Mongolia today is an independent nation that was unified and created by the will and vision of Chinggis Khan (Genghis Khan), the founder of the Mongol nation. Chinggis Khan was born into Mongol tribal nobility in approximately 1162; his given name was Temujin. When Temujin was nine years old his father Yesugei Khan, was poisoned to death by his tribal enemies, the Tartars. Temujin then went on to survive abandonment by his clansmen, near starvation, capture by enemies, war wounds, betrayals and the kidnapping of his wife Borte. Temujin was able to rescue Borte and later attracted a band of followers from many different tribes who saw in him signs of a visionary leader destined for greatness.

Temujin fought and overcame the Dorbets, Tartars, Seljuits, Tonkaits, Merkits, Keraits, Naimans, and other Turkic and Mongol tribes in Mongolia as his power grew. After these successful campaigns he was formally recognized as the supreme leader of the tribes of Mongolia in 1206, and given the title of Chinggis Khan, which means ‘Universal Ruler’ and this was the basis for the formation of the nation of Mongolia.

Chinggis Khan then proceeded to conquer the Central Asian kingdom of the Khwarazmshah in 1220, defeated all the tribes of northern China by 1226 and laid the foundation for the birth of the massive Mongol Empire. Before Chinggis Khan died in 1227 he chose his son Ogodei as successor and advised his sons to expand the empire, recognize Ogodei in writing, and to serve each other for the sake of unified strength.

Today Chinggis Khan is recognized by many as a military and political genius without parallel whose empire endured for generations while in comparison Alexander the Great’s empire crumbled as he died.

One of the enduring legacies of the Mongol Empire was its facilitation of vigorous cultural exchange, knowledge, personnel and technology between the East and West over several centuries. Chinggis Khan’s court tolerated all religions as did the courts of his descendents within their domains of the Mongol Empire. The Mongol Khans helped promote the development of many art forms including Chinese schools of art during the Yuan Dynasty and miniature Persian illustrated royal histories called ‘Shahnameh’. The patronage and artistic vision of the Mongol rulers of Persia refined the miniature illustration technique and this art form became one of Persia’s greatest claims to fame. The Mongol Empire bred remarkable hybrids and innovations in many fields of endeavor including architecture, military science, diplomacy, communications, commerce, and political administration. The Mongol Empire’s great legacy developed through the Mongol peoples energetic exploration, natural curiosity and promotion of artistic, technological and philosophical cross-pollination.

The Mongol Empire at its greatest extent spanned most of Asia with its dominions reaching from Korea to Hungary and down to the Indus. The Mongol Empire Khans and their generals defeated the armies that controlled the territories of the nations we know of today as China, North and South Korea, Myanmar, Iran, Iraq, Syria, Turkmenistan, Kazakhstan, Uzbekistan, Kyrgystan, Tajikistan, Georgia, Azerbaijan, Armenia, Afghanistan, northern India, Hungary, Transylvania, Bulgaria, eastern Germany, Russia, Ukraine, Poland and others.

The lands that make up modern day Russia, Ukraine and Kazakhstan were conquered and ruled by the Mongol Empire’s Golden Horde Dynasty from 1237 until 1382. One of the greatest military battles of all time unfolded in 1223 when the armies of Russian nobility engaged the Mongols at the Battle of Kalka River. The Mongols outfought and destroyed the armies of the overly confident Russian princes and sent a collective shockwave that reverberated throughout Europe for centuries. The Golden Horde’s rule endured in Kazan and Astrakhan till 1554 and lasted in Crimea until 1783. Some historians5 have reasoned that the Mongol Golden Horde Dynasty helped unite the Russian princely states and aided Muscovy’s development as a regional power, which ultimately led to the creation of czarist Russia and its consolidation of Central Asia.

Mongol armies had conquered and occupied all of northern China by defeating the Chin Dynasty in 1234, which gave rise to Mongolian rule of China. The greatest Mongol ruler of China was Khubilai Khan who came to the throne as predicted by his grandfather Chinggis Khan. Khubilai Khan’s reign over China, from 1261 till 1294, brought about a period of great innovation and enlightened development throughout China. Khubilai Khan allowed China, a closed-off nation, to be opened up to foreign trade, and promoted the export of Chinese goods and culture. In 1264 Khubilai Khan established his capital at Peking (Beijing) the city Chinggis Khan had conquered in 1215. By defeating the Southern Sung in 1279 the Mongol Yuan Dynasty unified China for the first time since 970 B.C. and ruled the reunified state of China till 1368. The sudden outbreak of the plague caused China to lose between one-half to two thirds of its population by 13517 and this situation also contributed to the weakening of the Yuan Dynasty of the Mongols. A Han Chinese peasant named Zhu Yuanzhang led a peasant rebellion and forced the weakened Mongol Yuan court to leave China and he became the first Ming Dynasty ruler in 1368.

Warfare between the western Oirod Mongols and the eastern Khalkh Mongols from 1400 to 1454 led to an extended and tumultuous division between the Mongols. Esen Khan the Oirod Mongol chief reunited the Mongol tribes and captured the Chinese Ming ruler Yingzong in 1449. In 1552 the Mongol prince Altan Khan defeated the Oirod and reunited Mongolia. Mongolians largely adopted Tibetan Buddhism during Altan Khan’s reign, 1543-1583. The Ming Dynasty itself was gradually weakened by its long wars with the Mongols, internal political conflicts, feuding Chinese court eunuchs, corruption, and other regional campaigns.

In 1644 the last Ming ruler Ch’ung-Chen was toppled by yet another Chinese peasant uprising. At that very moment a nomadic tribe called the Jurchen, later known as the Manchu swept into northern China, seized the imperial throne and claimed the Mongol’s ‘Mandate of Heaven’ as their divine right to rule all China. The Manchu adopted many of the sovereign traditions of the Mongols8 and tried to present themselves as being related to the Mongols through several means including marrying into Mongol royalty as an effort to gain legitimacy and prestige.

With Russian assistance Mongolia was able to expel Chinese troops trying to reassert Chinese rule in Mongolia in 1921. From 1924 till 1990 Mongolia was known as the Mongolian Peoples Republic and was governed by a Communist single-party system under the influence of the U.S.S.R. During the Soviet-style Communist period Mongolia was largely inaccessible to visitors from the West. Until the 1990’s Buddhist monasteries were mostly closed, industrial development was limited, private land ownership was not allowed and there was no official recognition of Chinggis Khan. In 1990 Mongolia had a peaceful transition to a democratic multiparty system of government with democratic elections successfully held in July of 1990.
Posted by Mongolian Culture at 9:10 AM No comments: