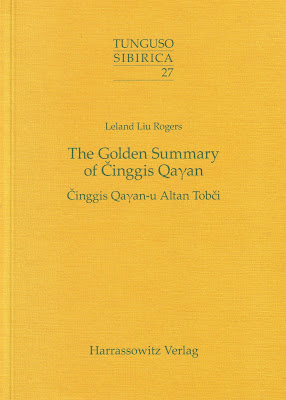 This remarkable book, The Golden Summary of Činggis Qayan - Činggis Qayan-u Altan Tobci, by Leland Liu Rogers, is based on a manuscript discovered inside a cave near Hohhot, Inner Mongolia by Professor Dorongya of the Institute of Social Sciences. This Mongolian language manuscript dates from the early post-Empire period. The author has projected dates for this work having been written as being between 1550 to 1575 -- during the reign of Altan Khan.

This chronology lacks material from the Secret History of the Mongols and does not include the standard Buddhist introduction found in similar works. It is primarily concerned with the Činggis Qayan (Chinggis Khan) čadig incarnation story. As Rogers’ footnotes explain, “čadig comes from the Sanskrit word jataka, which has the literal meaning of “birth” but has a literary meaning of “the adventures of original (former) births.”

The Činggis Qayan-u Altan Tobci’s manuscript is reproduced in transliterated Mongolian, which is followed by an English language version of the imperial chronology.

The first part of this extraordinary history begins with the legendary story of Chinggis Khan’s father, Yusegei, meeting his wife-to-be during a hunting excursion. The Golden Summary contains many other compelling chapters and critically important cultural aspects in the life of the emperor and his relations, including illuminating stories about Qasar, Chinggis Khan’s younger brother “whose descendants retained a substantial amount of noble status”, according to Rogers.

Leland Liu Rogers has produced a vitally important book ( replete with extensive and invaluable footnotes), which is a precious resource for the Mongolian history specialist, as well as the general reader interested in the unique perspective of the Mongols about Chinggis Khan and the Mongol’s cultural ethos on the eve of Manchu suzerainty
Posted by Mongolian Culture at 10:01 PM No comments: